As a young man growing up on the Isle of Wight Euan developed an interest in ships sailing by and joined his first ship in 1965, leaving his last one in 2014 after almost 50 years in the Merchant Navy.  Euan had been living in Hessle with his wife, Judy and family until then – the family moved to Gilberdyke in 2015 to enjoy a more peaceful rural retirement.
Shortly after arriving he became encouraged to take an interest in the Parish Council and after attending meetings for 2 years as a member of the public became a Parish Councillor in 2018.
Euan and his family have a dog, Henry and enjoy walking  with him every day around the village and surrounding area when they meet with many fellow dog lovers and other members of the community.
Euan is a father and grandfather. He plays golf and enjoys DIY, gardening and his GPC involvement. 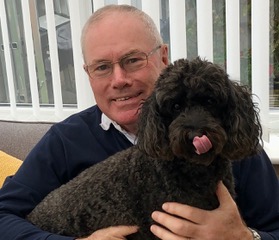